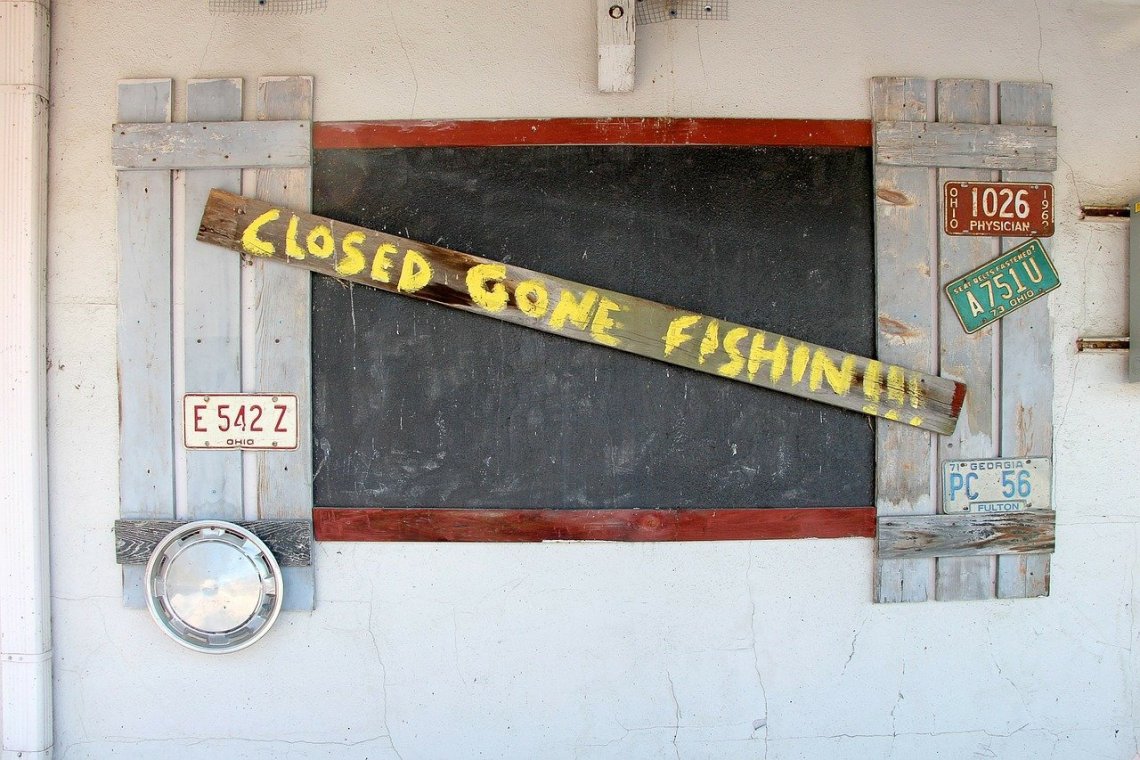 I’ve waited years to be able to say that I am retired, and I’ve gone fishing.  I knew that one day I would retire, but the last time I went fishing I was about 8 years old with my Paw Paw, back when we dug the bait, and I wasn’t afraid of worms.

Recently we had a family outing compliments of my cousin and his wife at Crosby Lodge near Golden Meadows, Louisiana.  Our first stop on our road trip was to hubby’s hometown, Beaumont, Texas–Big Money Texas (BMT).  It was bittersweet for him since he recently sold the family homestead after the death of his mother which means going home is now different for him. 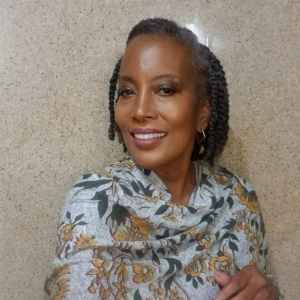 While in Beaumont we were going to meet relatives for dinner, but I forgot my sweater–you know it can get cool in restaurants so I needed to go shopping.  Believe it or not, Beaumont had traffic on the way to their shopping district so I stopped at Cracker Barrel and purchased a great wrap that I absolutely love.  Cracker Barrel has some great deals on cute clothing at reasonable prices.

The next morning we met up again at Cracker Barrel with our cousins, and then we 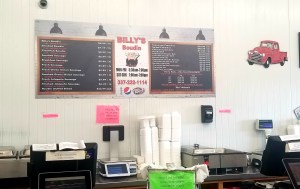 were off to go to Louisiana.  About two hours into the trip at exit 97 on I10 the guys stopped to get gas while we explored Billy’s Boudain and Cracklins. It had all types of boudain, and other things that you don’t see every day.  We didn’t purchase anything since we would be coming back the same way, and we had just had breakfast. 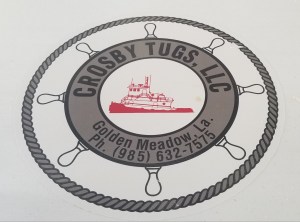 Our first stop was at the headquarters of Crosby Tugs, the owners of the fishing lodge. We toured the facility–they have a complete grocery store for their ships when they come to shore.  While there, my cousin picked up two cakes–strawberry and banana nut.  He had requested the strawberry one and made it clear to all of us, it was his.

We drove to the boat loading dock where a boat picked us up, and yes it did have air 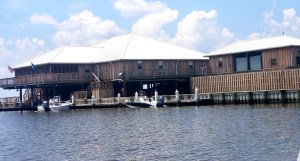 conditioning.  We sat back for about a 20-minute beautiful ride.  The water was so soothing, looking at the shore as it got further away was just amazing.  Then literally out of the water, the Crosby Lodge appeared. In all her splendor with fishing boats around her, she welcomed us.

The first thing that I noticed was the massive porch swings and gliders.  I love a good

porch swing and knew this would be one of the places that I would visit often.  Our luggage was bought up and put in the hallway.  We had our selection of any room that we wanted.  We chose one that had a door to the deck overlooking the water.

Each room contained a queen bed with a television, an atmospheric water generator (awg), hand sanitizer, and other bedroom furniture.  The bathroom had everything that you needed from a toothbrush, toothpaste, soap, deodorant, bath soap, bath gel–any and everything you might need during your stay.  There was even bottled water available. All you needed to pack was your clothing (they did give you shirts).  Lunch was ready as soon as we put our things away, and it was delicious.  The guides informed us that as soon as we were ready, we could go fishing, and we did.  There were caps, towels, and sunscreen there for us.

Mr. Kip was the guide that I went with every day.  The first time he took us out there were three of us. My cousin Haskell was there to assist me but left us on our own the next time.  Even the boat ride was amazing with the best music around.  Mr. Kip kind of looked like Sonny Crockett from Miami Vice especially with the music, at least that is my story. 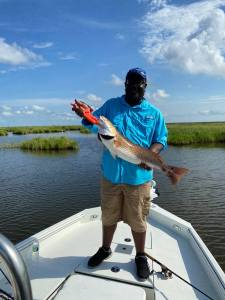 My cousin started the fishing fast by catching at least three within about 45 minutes while his sister and I waited for the fish to take the bait.  Finally, I caught one that Mr. Kip showed me then threw it back in–it was some type of catfish.  I count that one even though I didn’t get to keep it.  Then I got a red fish!! It’s harder than it seems to reel them in, but I did it. Can you say excited?  I was.

Back in the lodge after a shower, we had dinner with 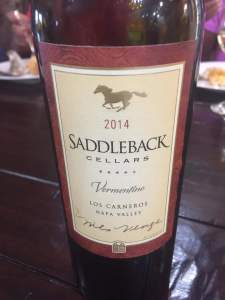 the owner of the lodge and his wife.  They were a joy to talk with.  While dinner was served, we were offered cocktails, wine, soda, coffee, whatever we wanted.  I found what I like–Saddleback Cellars Vermentino.  The conversation lasted well into the night while we kept an eye on the Olympics.

Breakfast was ready at 6:30 AM–early (we chose that time).  All I needed was a cup of coffee and a piece of bacon.  Then off Mr. Kip, Kaye, and I went to start day 2 of our fishing trip.

For a while, it didn’t seem like the fish were biting, but this really didn’t bother Kaye or me.  We just liked the water, music, and conversation.  After we moved a couple of times, Kaye’s luck began to change, and she caught at least 3, and I didn’t have any.  Just before we headed back for lunch, I got lucky and caught one–this one was a trout. 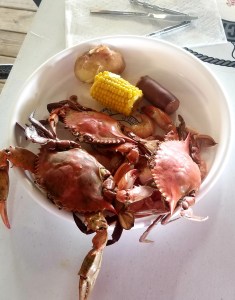 Back at the lodge after a quick shower, we had an authentic Cajun shrimp boil with shrimp, crab, sausage, potatoes, and corn with a great sauce that Miss Poppy made from scratch.  Since I don’t really know how to crack anything but the claws Miss Poppy became my teacher. We had so much great food that I don’t think anyone ate all of theirs.

Kaye and I decided we had fished enough for the day, and we decided to find those porch swings.  My hubby

decided that he would join us as we were swinging.  I had said I would read “The Personal Librarian” while swinging, but I talked instead. When the other two fishing parties returned, we learned that one had a great haul while the other one–my sister caught a shark!  Yes, a shark.

Again dinner was fantastic, and we sat around afterward just enjoying the conversation, watching the sunset, and enjoying each other. After we went inside I did get to read a little while I sipped my new favorite wine.

Grits had been requested for breakfast, and one of the guys who said he had never made them before decided to try his hand.  They were good especially if you ate them with a piece of bacon. Then we were off for the final fishing. 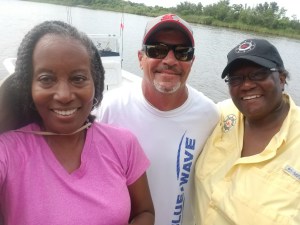 Kaye and I had no luck, we had those that got away, but nothing to take back with us.  It didn’t matter, we laughed and talked with Mr. Kip while we listened to the great music. This time we headed back at about 10:30.  Lunch would be early, and again it was fantastic.

Our luggage was packed and sat in the hallway to be loaded on the boat.  Fish that was caught had been prepared for the trip home. The only thing left were goodbyes 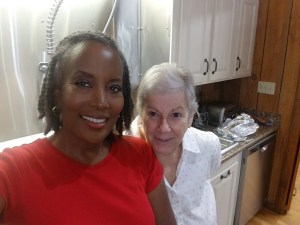 to the wonderful people we had met, and

who had made our fishing trip exceptional.  Our driver on the boat ride to the docks was retiring, and we were his last passengers.

After loading our cars, hugs given, we were headed home, my cousins to Houston and Tyler.  My husband, sister, and I were off to Fort Worth.  We followed each other until we got off for gas and then stayed again overnight in Beaumont.  Age has taught us we don’t like to drive long distances at night. We stopped to purchase a couple of bags of my favorite coffee–Seaport.  I always have to stock up.

It was a trip of a lifetime.   Remember “thisisyourbestyear”. Thanking God for family, friends, and for the blessing of being able to say “I’m retired–gone fishing”. 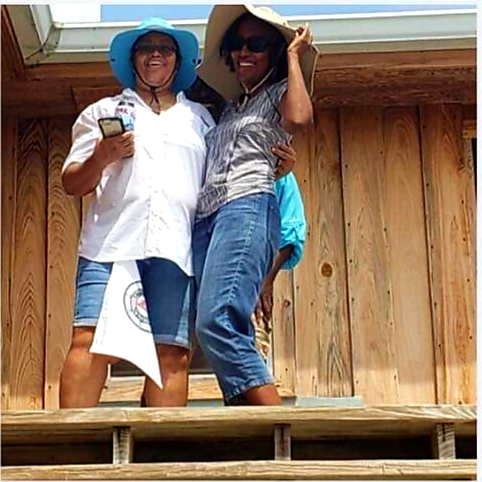 *More pictures and videos will be posted on our social media pages (Facebook/Instagram).

Skin Changes and so Must Soaps

Dr. "mOe" Anderson And I Have A Little Talk

Turning Thought Into Action: Self-Improvement Tips for Your Best Self