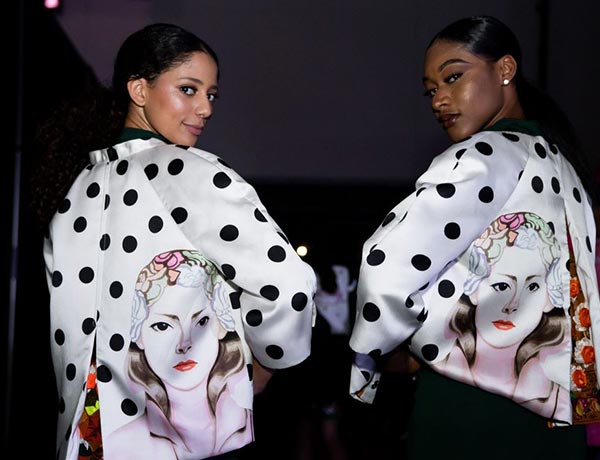 What do you do when you are on your way to one of the most amazing runway shows this side of New York or maybe Paris? You make a stop that has been on your to do list.  First of all you take back the rental car and exchange it for a pickup.  We like to sit up high (thanks Enterprise Rental), and then we hit the road to Austin, Texas to cover Austin Fashion Week–Fashion X Austin and their Celebrating Texas runway show.

On the way we decide to stop at Magnolia Farms and see what Chip and Joanna have done to the place.  After window shopping for a while we were a little thirsty so we decided to go get some original Dr. Pepper at the soda shop next to the Dr. Pepper Museum.  Yes, it does taste different than the regular ones.  Then we were off to Austin, Texas.

This was our second time covering a show at Fashion X Austin, and this was being presented at the Austin American Statesman building.  At first glance you think that it can’t be a lot of difference between Austin and Dallas, but there is.  There were vendors in the gallery, free food and drinks and even photos to be taken.

Now most shows don’t want you to talk, but not Austin, they want you to be loud, show your love for the designers and all of their hard work.  The people who came to celebrate the designers of Texas did just that.  It kind of reminded you of the excitement of Friday Night Lights–no band, but still great music.

From the beginning it was not your typical runway show.  The first models to come down the runway were not professional models, and Texas designers did not dress them. They were modeling for the ARC of Texas and Nordstrom’s Department Store provided the outfits.  Austin was electrified.  Showering the models with love and respect.  It was great.  Even those who were so shy as they started their walk down the runway gained so much confidence as they continued their way.  We love Austin for this part of the show.

The excitement continued as each designer sent their models down the runway.  There was no polite applause, there was stadium sized enthusiasm which made it a great experience.  Austin does fashion different than most, but it is a good difference.

After the show there was a party given at a local hotel with the models, and designers among the many guest.  They did it Texas style.

Since we were in Austin, we wanted to eat like the locals, but semi healthy.  Friends told us to go to Jack Allen’s a farm to table place.  It was funny, but we knew we couldn’t go wrong when our server informed us he was from Fort Worth. Great food and great service. While eating we were still discussing our favorite designers from the night before.

After lunch we decided to see the sights of Austin, but not the usual sights, we decided to walk the trails of Mount Bonnell which overlooks the Lake Austin portion of the Colorado River.  They say it is a popular tourist attraction, but neither of us had ever been.

We met up with old friends.  Some we were able to see and sit and talk with for a while.

On Sunday we were going to sleep late, and then catch breakfast and head back home, but we were invited to attend church at Greater Mt. Zion Baptist Church, and we accepted. It was a spirit filled service lead by Rev. Gaylon Clark. A big church with a small church feel.  Meeting the minster and the members was a blessing that we enjoyed.  Then off to lunch with a friend for more great conversation.  Finally off we went–home.

We saw great fashion at Austin Fashion Week, ate great food at Jack Allen, fun exercise at Mount Bonnell, wonderful church at Greater Mt. Zion Baptist, and did we forget to say wonderful bed pillows at the JW Marriott. I could go on and on about the pillows since I have not slept on one for over 10 years until Friday.  The best pillows ever.

Remember “thisisyourbesyear”.  You can put a lot of enjoyment into one weekend. Work can be fun!

A Love Note Came In The Mail

Just Because I’m In it!

If the shoe fits

Women Over 50 Are Starting Businesses Left and Right. Should You?